As well as the medieval activity found at The Acres site, there is evidence of a Medieval Farmstead in Woodlands Field, off Green Lane. This consists mainly of soil marks in a square of about 350m and an adjoining L-shaped mark. The pottery has been dated to 1250-1350. 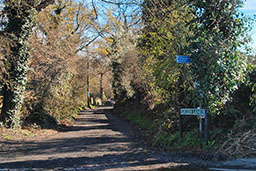 It is suggested that an ancient trackway ran south and north to the east of Salfords. Part of it ran from Cross Oak Lane, through Perry Wood alongside the Sports and Social Club of that name, over Honeycrock Lane, alongside Dean Farm to Whitebushes. Much of it can still be seen and forms Green Lane, The Brow and the western leg of Bushfield Drive. (Earlswood-Salfords-Horley ancient trackway by Roger Ellaby 2000)